Firstly, I realize it's been way too long since I last blogged and I'm aware that I need to step up the blog game just a bit.
Secondly, I learned a valuable lesson a couple of weeks ago: the best path to honesty is a prank.
There's this part of me that often wonders what my life would be like if I chopped half my hair off. Would every day be sunny? Would people treat me different? Would I develop special powers? (Unless extending your life span due to less time spent under a hair blower is considered magic, I think the latter is highly unlikely... BOO!)
A few weekends ago, while blowing out my heavily layered hair, I pulled the bottom layer into a pony tail and let the top layer dangle just above my chin. When I walked by a mirror I did a double take. With my hair straightened and pulled back in this particular way it totally looked like I had a bob. Interesting! I thought first. Then the devilish laugh started to bubble in my stomach and soon escaped my mouth. I quickly grabbed my camera phone, took a self portrait and sent it to several friends. This was the photo: 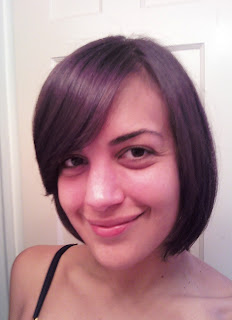 The replies? The three girlfriends I sent it to all loved it. They were in shock but loved it as most girls would because it's ....girly. The guys though? Ha! Their replies were "WTF?" "No you didn't!" And the best response? Jaime's: "You cut your hair?" which was then followed by "It's mad short." He's defies all that is obvious time and time again, amazes me. I think he may have passed out at some point in time because there was a delay between texts.
It wasn't until I sent out this photo later on in the day that everyone realized they had been totally fooled. 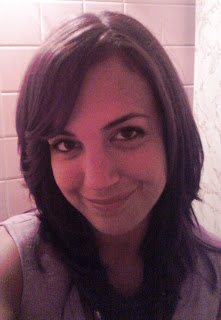 (Yes.. I took it in the bathroom of a wedding hall.) I could sense a sigh of text relief from several of those that had been pranked; Jaime, the happiest of all.
So what did I learn from this prank? There is something about hair, especially when it comes to women and how they wear theirs that completely transforms how they are perceived. There are some faces that can work with short hair and transform a woman into a sex kitten i.e. Victoria Beckham. Then their are the faces, like mine, that work with short hair in a way that makes us look cute and older. Personally, I can't picture myself cutting my hair above my shoulders until I have a small child to run after and having long hair is just a hassle. Until then, I'll stick with below the shoulder locks... And I'm guessing that pleases at least one person :-)
Written by Unknown at 11:16 AM 4 comments: