Before I begin my review, let me dazzle you with a bit of back story in regards to my upbringing with the Yankees and the Mets... 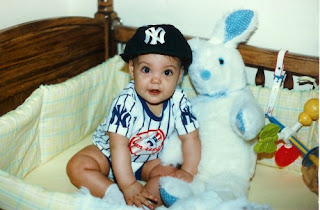 Yeah, that’s me, a little short of being one year old, and yes, those are Yankee colors I’m wearing. Why? Well, clearly, my parents were fans and so, by no choice of my own, I was branded. Good or bad? Well, let’s continue…

When I was still very young and under the care of two working parents, I was raised by my loving aunt with whom I spent countless hours…watching Mets games. I’m old enough to remember watching the last World Series won by the Mets (1986), while secretly wearing a Mets t-shirt (“Don’t tell your dad!” my aunt said, bribing me with chocolate chip cookies.)

Then came high school, during which the Yankees won two World Series, and the winning game of one series actually fell on my birthday. How could I resist cheering them on after that?

And now? Let’s say I’ve been influenced enough to simply enjoy watching both teams. With my history, you can see I’m hardly biased by either team. That being said, the following review comes from someone who wanted to check out these hugely expensive architectural structures and report back on her experience. So let’s start with the place where my journey began…Citifield.

April 25, 2009 – The Mets were playing the Nationals, it was a glorious 80 something degrees and I was visiting Citifield for the first time with friends who hadn’t yet seen it either, and who happened to just be die-hard Mets fans. First, let me show you their overall opinion:

As for me? I had no “he’s not really a Met” beef with the Jackie Robinson rotunda. I thought it was a beautiful way to capture the immediate attention of those visiting the field. It had a wonderful nostalgic element from the murals down to the choice of brick. Even the placement of the escalators was artistic. From that point on, the other places we ventured through continued to capture my interest. There’s nothing more alarming than prices of souvenirs at the various shops throughout the stadium, but at least they offered cool items like throwback jerseys and mixed color uniforms. The promenade was perfectly airy and the bridge leading from the promenade to the food court gave you both a spectacular view of the field, as well as the chop shops across the street from the stadium (who doesn’t like to be reminded of the surrounding neighborhood?) The food court itself was spacious, allowed for banter over beers and had one of the best burger joints ever: Shake Shack. Just the name makes me salivate. Too bad the line was ridiculously long, ending up eating Nathan’s hot dogs. Our seats were in the Pepsi porch section of the stadium. The upside: great view of the field (we paid $37/ticket), spacious and an open-air concession stand and standing tables right behind you in case you want to take a break from the game. Downside – if it’s raining, there’s nowhere to run for cover. Lucky for us it wasn’t raining and I came home with a tan and a smile.

May 6, 2009- I was asked to visit Yankee stadium with my friend and several of her friends, all avid Yankee fans. I quickly jumped at the chance for cheap tickets ($18 for a seat in the very top terrace and 11 rows back) after hearing the stadium seats are normally high in price. Upon exiting the 4 train we were immediately met by the pristine grey walls of the new stadium. I understand grey is a Yankee color but isn't there some way to brighten that up a little? Add some dark blue maybe? Other than the color, the structure itself is dynamic, like an alien world that landed smack in the middle of the Bronx. There will always be something majestic about it. Entering through the main gate, we walked directly into a large hallway that ran from left to right. Above us hung banners of the many Yankee legends, both former and current. The Yankee museum beckoned us, but I didn't get a chance to check it out. Just the fact that it exist within this fan space is a fantastic addition. We rode the (working) escalators to our level (this is a God send to Yankee fans who before had to deal w/endless ramps to find their destinations), passed the sealed off suite level and arrived at the promenade. Much like Citifield, the Yankee promenade is open air and allows for fans to stand and catch the game from different parts of the field. Each level houses several indoor bars/lounges as well. My only qualm is once inside you can only see the game on TV since they are situated opposite of the field. From where we sat the view of the field wasn’t bad at all, and I wasn’t overwhelmed by the feeling of being so high I might as well be in space. And, when the rain started to come down, I was overjoyed by the roof that loomed above us. Despite the loss the Yankees experienced that night, I still went home happy I’d been able to check out their new digs.

After visiting both stadiums, here’s what it came down to for me...Yankee stadium does better than Citifield at providing access to its culture and history for its die-hard fans. But, I am a die-hard for neither team. So while I enjoyed my time at both stadiums, it was really gauged by the experience and feel. Yankee stadium seems to be a place for revenue, high seat/food prices, an entire level dedicated to suites I’ll never be able to get into. Citifield felt like a hang out, a place you can go to see baseball, but also a place where you can walk around and chat over a (semi-reasonably priced) beer. It felt more like home. Which means more than likely, I’ll be visiting Citifield a few more times this season. But I still have love for you Yankees! And if one of you teams could just win the World Series this year, I'd really appreciate it ;)

Written by Unknown at 3:31 PM No comments: